Tailor your reading experience. The Reader’s Guide provides a description of the book, guidance for parents, and options for the reader.

This fantasy adventure is unique in its treatment of metamorphosis in humans. It is based on the science of genetics. The ability of some people to transform into a variety of mammals and raptors – their “alternate species” – serves as the vehicle for describing how genes work, how they are inherited, and the complexity of how they interact. The author interweaves the genetics of H. sapiens (used as the jumping off point for H. transformans) throughout the narrative..

The story is also unique in its treatment of dragons as mammals. It provides the ancestry and biology of the dragon species, which is predicated on mammalian characteristics. The narrative also provides interesting snippets of information regarding the characteristics of animals that appear in the story. Humans who can transform must rely on the capabilities of their alternate species for survival. 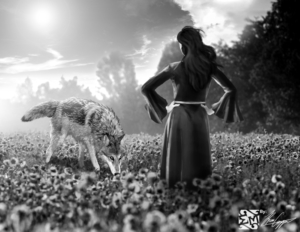 The story is divided into seven parts. Chapters within each part have subheadings that support and guide readers, especially younger readers. Subheadings also provide a way for readers to keep track of where they are in the story. Appendices augment the story and provide additional information about the characters, their alternate species, the lands that they settled, and the hybrid creatures created by the Cassius Foundation.

Supplemental notes accompany any chapter that references genetics and genes. They provide more information regarding the functions of genes, in general, and the functions of specific genes, in particular. These notes are not part of the narrative. Readers may skip the notes and stay with the story; then go back later to read the notes, if desired.

The story is fairly straightforward and easy to follow, so it supports many levels of readers. The story of Ruwena and her adventures is suitable for middle-school age students and older. Several of the creatures in the book may be too scary for younger children.

The story contains no foul language, sexual situations, or vulgarity. It does contain scenes describing violent events, some of which are lethal; however, none are graphic or gory. Two key characters die in the narrative: one from natural causes and one who is killed. Middle school children should be able to appreciate the mistreatment of some characters because of their species.

The genetics and ethics content is better suited for high-school age students and adults. The majority of the genetics content is found in the supplemental notes which the reader may choose to read or disregard. Ethical issues regarding the treatment of people with different characteristics and the use and misuse of genetic engineering are threads throughout the narrative.

To Read or Not To Read the Supplemental Notes

The intent of this book − and the story embedded in it − is to introduce the reader to genetics. Those who enjoy reading fantasy stories involving both real animals and imaginary creatures may be intrigued by the genetics that support the story. Descriptions of gene functions begin at a basic level and gradually expand in scope and depth as the narrative progresses. The supplemental notes expand on gene functions introduced in a chapter. The excerpt below, “Gene Mutations”, provides an example of a supplemental note.

Gene mutation is a permanent change in the structure of a gene. A mutation may or may not result in a change in the gene’s function. Changes in function, if any, could be beneficial or harmful. Mutations can be spontaneous (random) or induced (man-made). Many agents (mutagens) are known to cause a change in gene structure and/or an increase the frequency of mutations (Jorde, 2014a). Cosmic radiation (e.g., gamma rays and ultraviolet sunlight) are naturally occurring mutagens and are sources of random mutation.

When the author introduces a genetic term or concept for the first time, the author will define and explain it. Afterward, the author will use that term without repeating its definition or description. Fear not! A glossary in the back of the book defines genetic terms and other biologic terms used in the narrative. In addition, an index of genetic terms directs the reader to the pages where the term was used.

Skipping the supplemental notes may be a good strategy for those readers who have not been exposed to science and genetics in the recent past. In contrast, those with an abiding interest in genes and how they work – or those who are skeptical that such functions really occur may want to review the supplemental notes, which provide more detailed explanations.